KRISTIN HERSH (USA) in concert at the iconic Paragon.

Kristin Hersh is a founding member of the band Throwing Muses and 50 Foot Wave as well as having had an extensive and influential solo career.

Kristin Hersh returns to Australia, her home away from home, to perform material from across her catalogue interspersed with readings from her latest book  “Don’t Suck, Don’t Die”.

“Don’t Suck, Don’t Die – Giving Up Vic Chesnutt” is a memoir of her good friend, US singer/songwriter Vic Chesnutt who sadly took his own life in 2009.
“Friend, asshole, angel, mutant,” is the way that Kristin describes Chesnutt, a quadriplegic who could play only simple chords on his guitar but nevertheless recorded seventeen critically acclaimed albums and was named among the top five best living songwriters by NPR before his death. Hersh chronicles her friendship with Chesnutt in a book that shares insights into both their mutual bond and the pain and creativity that haunted Chesnutt. Hersh offers the most personal, empathetic look at the creative genius and often-tormented life of Chesnutt that is ever likely to be written.

Her memoir “Rat Girl” was widely praised from the New York Times to Rolling Stone which named it one of the top ten rock memoirs ever written.

Praise for “Don’t Suck, Don’t Die”
“Not only one of the best books this year, it’s one of the most beautiful rock memoirs ever written.” – Michael Shaub, NPR’s Best Books of 2015
“A Stunning, difficult and beautiful chronicle. The true Vic comes alive.” – Michael Stipe (REM)
“(Hersh’s) observations… always ring with a harsh lyrical truth….an eloquent, breathtaking testament.” – Pitchfork
“A raw, poetic memoir….a last, wonderful example of Chesnutt at his most charismatically mischievous.” – The Guardian
“It paints a more honest, insightful picture of the late singer-songwriter than any biography could…Beautifully, poetically told.” – MOJO
“The book’s great sadness is matched by the skill and vitality of Hersh’s writing; it will make treasured and troubled reading for fans of Chesnutt and the author alike.” – Kirkus Reviews 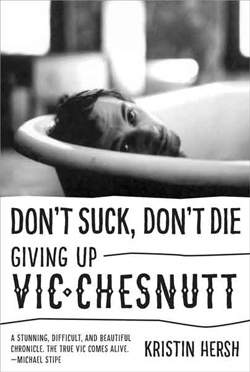 Arrive Shortly After Doors Open at 6:30pm for a Champagne Cocktail followed by a gourmet Entrée and Main course.
Show / event begins at 8pm.
Dessert served during intermission. Tea/coffee and Biscotti also available.
Concludes with a meet and greet and chocolates!
General Admission. Room configuration for the performance in the Banquet Hall is theatre style.
***Please note that the meal service is formal dining with allocated table numbers per bookings. If you have other guests who have booked separately that you wish to be seated with please let us know ASAP. 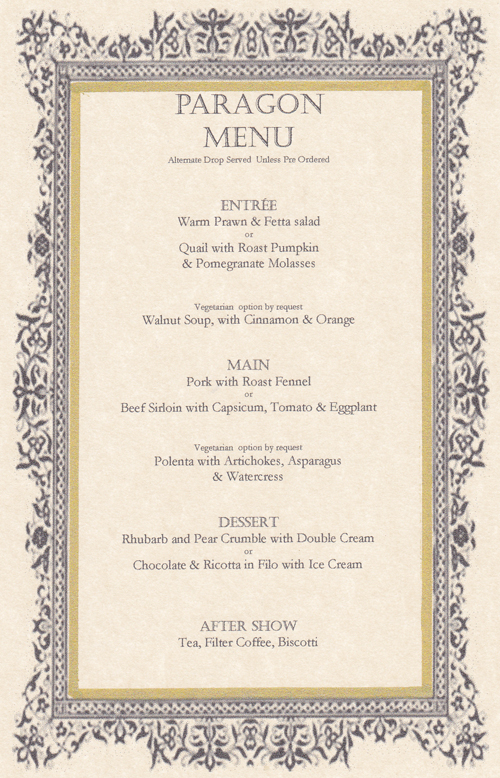 Or online $92.90 (Including booking fees):
www.trybooking.com/KGYE

An adrenalised, roof-rattling, performance monster, the trio’s excellent new release Secret Victory, penned mostly in Australia in early 2015, features the beautiful songs, free-wheeling, feisty instrumental jigs, stomps and reels and heart-breaking harmonies that have made them torchbearers for a new wave in traditional music.

For a band barely together 18 months, they are in demand live, returning to the UK and Australia in late 2015 for a run of festival dates including Woodford Folk Festival, Cygnet, Illawarra, Cobargo, Nannup, Port Fairy and the National and then back again in early 2016 after extensive touring in Canada.

Timber and Steel included ‘Secret Victory’ in their Top 25 Albums of 2015!

It has been a magical two years since The Mae Trio released their award-winning debut album Housewarming and hit international stages from Celtic Connections (Glasgow) to Cambridge Folk Festival and Americana Festival (Nashville), not to mention national Australian tours where they won the hearts of critics and fans alike. Winners of the Maton Class Act Award and the National Film & Sound Archive Award for Folk Recording of the Year, The Mae Trio is renowned for their sophisticated instrumentation and stellar three-part harmonies.
Their latest EP ‘September’ features an array of originals and new interpretations of some of the songs that have helped shape the band’s musical lives so far.

Join Anita Hillman (cello, bass and vocals), Maggie Rigby (banjo, ukulele, guitar, marimba and vocals) and Elsie Rigby (violin, ukulele and vocals) for an evening of contemporary folk that will leave you breathless.

It is a rare treat to experience such unique instrumentation and spine-tingling harmonies, and The Mae Trio promises bucket loads of both.

“a delightful Australian girl group whom it is hard to fault…theirs is an innocent, clear-skinned sound that’s long on banjo, fiddle and ukulele” – Metro (Glasgow)

Legendary US Bluegrass singer-songwriter and Grammy award winner, Peter Rowan, “the voice of Bluegrass”, returns to Australia with his Bluegrass Band, featuring Chris Henry on mandolin, Patrick Sauber on banjo, and Paul Knight on double bass.

Chris Henry is one of the most highly regarded young musicians on the American Bluegrass scene today, “the premier Monroe-style mandolinist of his generation”, while Patrick Sauber has recorded or performed with many artists, including Doc Watson, Chris Hillman, Herb Pedersen, John Fogerty, Richard Greene and Laurie Lewis, and was the banjo-player in the movie, ‘A Mighty Wind’. Paul Knight has been playing with Peter Rowan in various configurations for about 20 years. His driving acoustic bass has been part of recordings and live performances with the likes of Jim Lauderdale and Laurie Lewis, as well as being integral to the sound of the Peter Rowan Bluegrass Band.

Peter Rowan is a true legend of American Bluegrass, with a history dating from 1964 and his role as lead-singer/guitarist with the father of Bluegrass, the late Bill Monroe and his Bluegrass Boys. Rowan then went on to form the revolutionary Folk/Rock band, Seatrain, which recorded two albums in the UK, produced by Beatles producer, George Martin. He left Seatrain to team up with David Grisman, Richard Greene, Bill Keith, & Clarence White (from The Byrds) in bluegrass supergroup, Muleskinner. He and Grisman moved on to form Old & In The Way with Jerry Garcia and Vassar Clements. Since then Rowan has released numerous albums of mostly original songs, is a Grammy Award winner and six-time Grammy nominee, and has performed and recorded with the likes of Alison Krauss, Jerry Douglas, Gillian Welch, Tim O’Brien, Bela Fleck, Tony Rice, Del McCoury, Guy Clark, Townes Van Zandt, Steve Earle, Flaco Jimenez, and Peter Tosh.

Rowan has demonstrated himself to be an artist of unusual depth and imagination, experimenting with other influences, while never losing track of the deep roots and musical purity that are integral to his presence. He is a singer and songwriter without equal, a multi-instrumentalist and accomplished guitarist. His beautiful singing is of the classic “high-lonesome”, borrowed by Monroe from the Appalachian ballad singers, and which became the defining style of all bluegrass vocalists. The spirit of Bill Monroe lives on in the old and new music he and his band will bring to Australian audiences on this tour.

“Rowan is one of the greatest and most important of all the bluegrass players. He understands what he calls “the joy” of bluegrass and acoustic music, and, with wonderful artlessness, he insists that he is coming to Australia to do nothing more than “be a singer of songs and a player of tunes”. His admirers know he will be much, much more than that.” – Bruce Elder, Sydney Morning Herald

Mike, Tinker & Ged are an eclectic band of misfits with diverse backgrounds in rock, Irish, bluegrass, old timey and everything in between. Comprising of virtuoso fiddler (Slim Dusty’s favourite), sultry singer and all-round musical genius Mike Kerin, Blue Mountains dweller Tinker Duffy, who plays fiery accordion and sings with husky vocals, and Ged Corben who holds the band together with his powerhouse rhythm guitar and delicate slide and mandolin work.

Winner of no less than 6 Golden Guitars, Mike Kerin leads this lineup of long time collaborators & stalwarts of the Oz Folk & Bluegrass scene. Apart from producing, arranging, recording & playing on many fine albums, Mike played for 10 years with 80‘s Country fave’s The Flying Emus, for more than 20 years with Slim Dusty in his Travelling Country Band, and currently tours with Anne Kirkpatrick & numerous national & international acts. Mike was the featured artist on the recently released ABC Fiddle Album “The Devil’s Instrument”. He has also played as a featured artist with the Australian Chamber Orchestra, touring Australia & Slovenia.
Tinker Duffy is no stranger to the NSW Folk scene. Hailing originally from Armidale, she has dazzled audiences with her fiery accordion playing from Newtown to Gulgong, & Yeppoon to Port Fairy over the last 20 years. She has had a lifelong involvement in the traditional music, song and dance of Ireland as well as in bush bands, dance bands, choirs and sessions.
Mike & Tinker are joined by co-hort Ged Corben on guitar, mandolin & resonator. Ged has at one time or another played with the original Cruel Sea, is lead guitarist with The Lime Spiders & moonlights with Rebecca Hancock & The Prison Wives, amongst others.
All three were members of the now defunct Wheelers & Dealers, winners of numerous National Folk Awards, who toured NSW, VIC and QLD extensively over the last 15 years.

The band play an eclectic up tempo mix of Celtic & American Folk, with a touch of Western Swing & Roots thrown in. They feature material from Mike & Tinker’s latest album “For Good Measure”, & Mike’s solo album “ The Dining Room Sessions”.