Limitlessly creative and playful, “The Opposite of Everything” dances down a line between the beautiful and the absurd, transforming Freeman-Fox’s intricate violin compositions into an infectious party.

Continually redefining what the violin is capable of, Jaron has fused his fiddling roots with a study of Jazz and Indian classical music. At age 14, he began an apprenticeship with Canadian fiddle pioneer Schroer, which lasted until Shroer’s death in 2008. Jaron has been playing his mentor’s custom 5-string violin since.

In four busy years, the outfit has performed across North America and Europe, including Winnipeg Folk Festival, Vancouver Folk Festival, Stockholm Jazz Festival, WOMEX in Greece and Folk Alliance in Memphis.
This will be their first appearance in Australia!

“The hyper-kinetic Jaron Freeman-Fox is the Jimi Hendrix of the violin.
With the chops of a classical virtuoso and the soul of a wild-eyed punk, he plays world music in the truest sense of the word, leaping from Gypsy to Klezmer to Celtic to Country without skipping a beat.”
– Ottawa International Jazz Festival

“Jaron Freeman-Fox calls his band the Opposite of Everything. With a name like that, you might expect his music to be pretty adventurous – which it most certainly is.
His new album begins with a remixed sample from a horse auction that melds into Indian vocal percussion. Before the album is finished, you’ll hear growling that would make Tom Waits proud, a version of the Doors’ “People Are Strange” that makes Jim Morrison sound boring and even some throat singing.
Freeman-Fox’s musical exploration has literally taken him all over the world and he finds inspiration everywhere he goes.”
– Reuben Maan, CBC Music

“Jaron Freeman Fox and the Opposite of Everything electrified the crowds wherever they went at Live From the Rock. The exuberance, talent, creativity and controlled insanity demonstrated by this exciting Toronto conglomeration was a joy to behold.”
– Jennifer Ives: Artistic Director, Live from the Rock Folk Festival

With a driving banjo, doghouse bass, a sweet fiddle, Blue Mountains locals ‘Lime and Steel’ take a bluegrass string band, throw in a rock drum kit and a uniquely Australian intonation for a show of originals that moves from pub rock anthems about EH Holdens to convict murder ballads. Lime and Steel’s sweet harmonies twang through Bogan bluegrass love-songs and wind up into a spoon-tappin’ fast-pickin’ wine-soaked hillbilly family singalong.

One Show Only – Don’t miss your chance to enjoy this unique musical experience!

Bobby Fox was hand picked by Mr Frankie Valli himself to play the front man of ‘The 4 Seasons’ in the smash hit musical JERSEY BOYS. He went on to perform the role over 750 times and won many awards. Bob Gaudio described him as “a real star”.

The 1960’s changed music forever. In Britain, a subculture of young people refused to conform to the rules of music. The norm was the enemy. They called themselves “Mods.” At the same time, across the Atlantic ocean, in New Jersey a small group of hard working guys named “The 4 Seasons” were about to change the face of pop.

On his new debut album with Warner Music, ‘The Fantastic Mr Fox’, Bobby pulls out the best of his 60’s mod 45’s from his personal collection. The album pays tribute to Elvis, Nat King Cole, The Coasters, Dean Martin and features a duet with none other than the stunning Miranda Kerr.

Now, combining the greatest hits from Jersey Boys and his stellar debut album, featuring You’re The Boss, I Wanna Be Your Lover, The Night, Chance for Romance, and a couple of other surprises…

The Fantastic Mr Fox could charm the birds out of the trees but that’s another story. How high can he sing? Well how long is a piece of string? He’s gonna zig when you zag, he’s gonna hip when you hop and he has no opinion of where your advertising dollar should be spent. More than anything else The Fox has a good ear for a righteous tune when it comes a knocking and he knows that it’s always the right time – night or not – for the right tune with the right charm.

Doors Open 7pm. Show starts 8pm.
This is a theatre style seated show – seats are general admission and are not allocated.

Pure Bohemia combines Art & Music, it is a night of Gypsy Jazz and Life Drawing. A model in the centre of the room with a Gypsy Jazz ensemble, Gadjo Guitars performing.

It is a very interactive evening.
Guests are invited to come and draw or just listen and sip good wine, enjoy some wonderful food and soak up the atmosphere.

BYO own artist materials.
Prizes for favourite drawings including a CD pack featuring music by the musicians playing on the evening.

Gadjo Guitars: Sophisticated, passionate, and world class. Gypsy Jazz at its best.
The word Gadjo is a name gypsies have for non gypsies, but you wouldn’t know that these guys have nothing but the gypsy blood flowing through their veins. Gadjo Guitars is the coming together of three great Sydney musicians who share a love for good music, in particular the music of Django Reinhardt, the famous French gypsy who set the bar of guitar playing at an Everest like height back in the 1930s. The band comprises of Nigel Date and Cameron Jones on guitars and Stan Valecos on bass. Band members regularly perform together and separately with some of the best names in the local and international gypsy jazz scene including Ian Date, George Washingmachine, Ian Cooper, Daniel Weltlinger and Lollo Meier.
Gadjo Guitars are a vibrant, sparkling, swinging gypsy jazz trio. Full of good energy, humour and possessing a unique Australian flavour, they are guaranteed to create a wonderful atmosphere and leave you breathless, smiling and asking for more.
Web: www.gadjoguitars.com
Facebook: www.facebook.com/gadjoguitars

Arrive 6:30pm for a Champagne Cocktail followed by Canapés and a gourmet main course.
Show begins at 8pm.
Dessert served during intermission.
Concludes with tea/coffee, Biscotti and chocolates!
General Admission. Formal dining for the main course in the Grand Dining Room.
Room configuration for the Cocktail Lounge is lounge style.
Not to be missed!

Paragon’s Chef David Povelsen spent his first 4 years working at Solitary which saw the restaurant maintain it’s coveted position as a ‘one hatter’ in the Good Food Guide. In 2007 David realised a chef’s dream when Solitary attained 2 hats and was one of only 2 two-hatted restaurants in the state.

We are delighted to be able to include David and his talented culinary skills in these unique experience events at the Historic Paragon Café.

The menu will be an alternate drop, unless guests advise the cafe of preferences prior to the evening of the event. Please note that vegetarian options are also available by prior order. 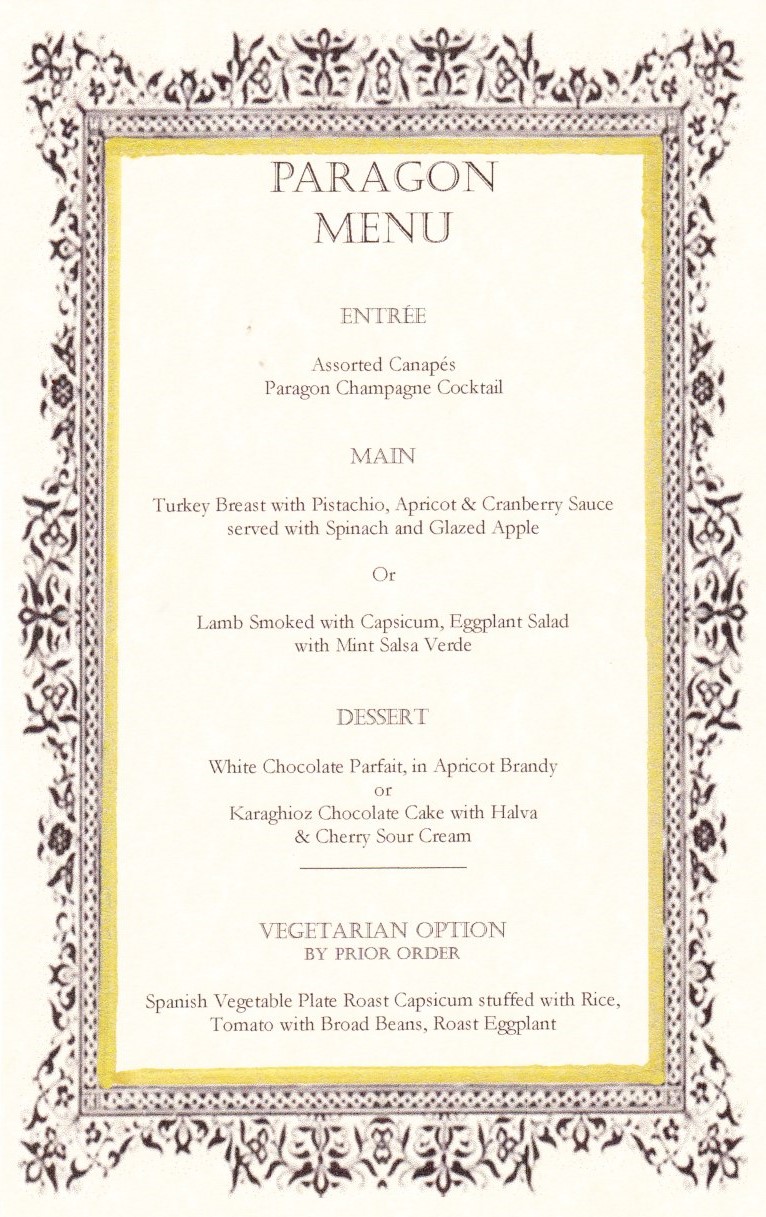 Or online $82.50 (Including booking fees):
www.trybooking.com/GEDW

$80 on the Door from 6:30pm Fri 9th Jan 2015 (Unless Sold Out)
This is an intimate seating and tickets are strictly limited!