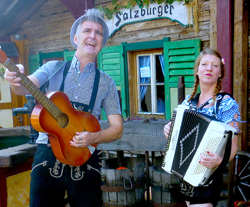 A yodellin´, thigh slappin’, lederhosen wettin´ fest of German music from Deta (accordion, vocals) and Rob (guitar, vocals) and featuring the Beatific Beats of their Bavarian Boombox. You´ll thrill to comic classics from the likes of Rammstein and Kraftwerk; you´ll tear off that dirndl and shake a Teutonic Tailfeather when you catch a glimpse of Nena´s 99 Red Balloons; you´ll swoon to Marlene Dietrich´s Lili Marlene but, most of all, you´ll be entertained – and that´s an order!

Deta and Rob always felt that the German Oeuvre was a little under represented in The Beez, so here they are to make amends with an evening of Dancefloor-Compatible Deutsche Derring-do, featuring Deta´s fabulous “Brunhilde Bass“ accordion. One octave below the conventional accordion bass, this is an Alp-quaking tone of Wagnerian proportions. Melded with Rob´s custom Höfner “Blitzkrieg“ guitar, it´s an irresistible rockin´ Polka machine held together by the marching rhythms of a loop machine by the name of Wolfgang Amadeus and, of course, those gorgeous harmonies and cabaret sensibilities which are the icing on the Schwarwälderkirschtorte.

Deta and Rob both hail from Berlin; their band The Beez performs regularly throughout Europe and Australia. They´ve appeared on ABC TV´s Spicks and Specks and at just about every folk festival you care to think of.
The Sauerkrauts will be touring Australia from January to May 2017. 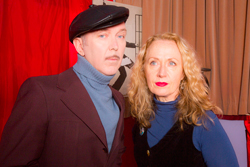 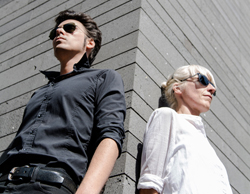 This weekend we were really looking forward to enjoying KIM CHURCHILL with you all but alas it wasn’t to be.
Never-mind something else to look forward to when we can all be together again!
New rescheduled date: 5th SEPT - Kim Churchill ‘I Am Forgetting The End Again’ 4th EP Launch Tour 2021 at Baroque Room, Carrington Hotel driveway entrance, Katoomba, Blue Mountains.
There are only limited Section A theatre style tickets still available for the late session. We advice booking quickly to avoid disappointment!

ServiceNSW ‘Discover' Vouchers can also be redeemed for concert bookings of any date if used before 31st August!
Guests can still book shows with confidence knowing that if a show needs to be cancelled for any reason then guests have the option to have tickets refunded, transferred to another show or attend the new dates if a show needs to be rescheduled. In the instance of guest illness tickets can be transferred on request too.