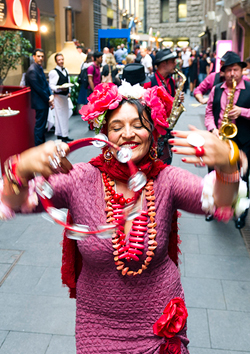 Lolo Lovina’s music reflects the cosmopolitan identity of an artist, who grew up with three native tongues and cultures. The charming and passionate performance of the charismatic singer makes each of her concerts an unique experience. Featuring Serbian Rroma drummer and guitarist Nenad Radic, Stuart Vandegraaff on Sax, clarinet & Ney, David Carr on guitar and banjo & Nathan Gatt on double bass.

Lolo Lovina have played at the Opera House, Guca Festival Serbia, in New Caledonia, in Europe and to full houses wherever they go. Their album Rroma Sapien received a 4 Star review in the London based World Music magazine Song Lines (June 2016) and was played in full on National Australian radio.

“(Lolo Lovina)…have created an album that swings from traditional to groundbreaking Rroma music, all imbued with a tremendous sense of fun” – Lucky Oceans, The Daily Planet ABC Radio National

“You have to listen to these people, this is the future of music” – Brian Eno, Luminous Festival, Sydney Opera House

“With musicians from Ukrainian/Romanian, Hungarian and Brazillian backgrounds, this music is authentic to its roots and played with vigour and precision.” – Bradfield Dumpleton

“Musically and culturally Planet/MGM consider the group to be in the forefront of contemporary world music coming out of Australia. Their live performances are exciting, varied and professional with consummate performance skills from all members.” – Graeme Regan, MGM the Planet Company

Come and join us for an intimate and entertaining Gypsy Ball.

Dressing in theme is encouraged!

VENUE:
METRO SOCIAL in the Bar / Restaurant of the Metropole Guesthouse Cnr of Lurline and Gang Gang Streets, Katoomba, Blue Mountains NSW 2780.
Opposite the Katoomba train station.
There is limited parking available at the rear of the property. Access can also be made through the rear. If entering from the front the bar/restaurant is on the right.

Drinks and light meals will be available from the Metro Retro bar once doors open.

This is an intimate seating space and tickets are exclusively limited

Concert and stories from his memoir accompanied by visual projections
to be held at the Kindlehill School Performance Space.

Fred Smith returned from two years working alongside Australian troops in southern Afghanistan to release the remarkable Dust of Uruzgan album. Now he has written a book revealing the back stories to the songs from the album and in so doing offers a humorous, sympathetic and comprehensive account of what was going on in this obscure little province in the middle of a difficult war.

Described as “a triumph of poetic journalism” and “finely observed snapshots of a harsh, sad and funny reality”, he weaves song and story to offer what 15 years of news reports failed to convey: an understanding of what 20,000 soldiers and a handful of our diplomats were doing over there in the dust of Uruzgan.

Fred’s songs and stories will be accompanied by projections of some stunning photos from Afghanistan.

‘I think a real strength of Fred’s music and the way he writes his songs is that he’s actually experienced a lot of what he’s writing about. He’s actually walked in the same footsteps of those soldiers he’s writing about . . . He ate, he slept, he bathed, he worked, he lived with them and when soldiers died, he mourned with them.’ – Colonel Jason Blain for Australian Story

“Fred Smith draws as convincing a picture as we will ever have of the tragedy, hope, oddness and courage of Australia’s Uruzgan enterprise… an astonishingly vibrant piece of reportage from the heart of our longest war.” – Hugh Riminton, Political Editor, Channel 10 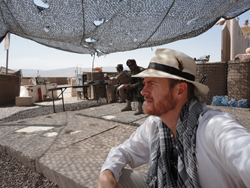 Fred Smith has emerged as one of Australia’s most fascinating artists. He has spent the last twenty years all over the joint: working on Australian stabilisation missions in Afghanistan and the South Pacific, touring in America and travelling the Australian festival circuit. He is the subject of the film Bougainville Sky about his time in the war-torn islands of the South Pacific where his work as a musician, peace monitor and radio broadcaster contributed to the success of the world’s first unarmed peace keeping force.
Fred was the first Australian diplomat to be posted to Uruzgan in July of 2009, and the last to leave in 2013. His job was to comprehend the complex web of tribal and patronage networks that made things tick. He came to see the province through Afghan eyes, as well as those of the soldiers he worked with. He wrote a powerful collection of songs about the realities of life for soldiers and civilians, recently released on a highly acclaimed album called Dust of Uruzgan. The title track was recently covered by Lee Kernaghan on his top selling Spirit of the ANZAC’s album.
Fred has put out about eight CD’s, including collaborations with Liz Frenchman and the Spooky Men’s Chorale. Two of these won National Film and Sound Archives Awards. At the 2015 Australian Political Studies Association Annual Awards, he won the Conference Organisers Award for his unusual grassroots approach to explaining Australia’s involvement in stabilisation operations in Afghanistan and the South Pacific to the public.

Rhythm Hunters are excited to be bringing their infectious dance grooves back to the Blue Mountains for another special show in Katoomba at the community hall.
Supporting on the night is local electro-acoustic four piece Sonori.

“Rhythm Hunters shone and inspired, the intensity of the drums, combined with the poetics of dance and martial arts was irresistible”. ~ Lisa-Maree Botticelli (Australian Stage Online)

“Rhythm Hunters seems to be a force of nature rather than a grouping of musicians…a show that was so musically engaging and complex that it feels like you have slipped inside an ancient myth or otherworld. I was clearly unprepared for the power of this act.” ~ Steve Gadd – Director Cygnet Folk Festival
www.therhythmhunters.com
www.facebook.com/TheRhythmHunters

SONORI
Formed in the music and art rich community of Katoomba, in the Blue Mountains of NSW, Sonori was the result of the unlikely convergence of an effects loving classically trained cellist, a post rock guru and an electronics junkie. Word of this intriguing and unusual combination lead to a gig booking before they had even played a single note together. Beginning life as an instrumental three piece made up of looped cellos, guitars/keys and drum machines, they were then joined by an eclectically influenced singer taking their original compositions to a whole other level with an extensive set of lyrical themes and versatile singing techniques.
They quickly discovered that their individual skills and complimentary differences blended with their shared passions and friendly natures, resulting in a musical style which fulfilled the promise of something special and unique.

Rich with soaring and shadowy vocals, thick layers of sound, and pulsing beats, they have been described as “Cinematic orchestral experimental journey music. Post rock you can dance to”.

Appealing to both the outgoing dancers and the inward thinkers alike, they immediately captured people’s attention and the buzz that was created on the local scene following their first few shows confirmed that they were onto something.
As their sound continued to develop through a string of hometown appearances, the band commenced work on their debut EP, further solidifying the bond between the members as they all worked closely together on the writing, composition, arrangement, recording and mixing.

With a front page feature in local street press ‘The Haze Mag’, and multiple appearances on community radio, local support continued to grow as they appeared on stage alongside acts as varied as Sydney post rock giants We Lost the Sea, and Melbourne beats oriented world music titans Tijuana Cartel.
A trip to Psyfari festival in 2016 saw them playing a technicolour ‪Saturday night‬ set with a great response from the happy Psyfarians.

More recently the band spent two nights performing on the steps of Katoomba’s iconic Carrington Hotel as part of the ‘Culturescape’ festival event, where their music provided a live soundtrack to the works of local artists projected across the face of the building as the band played.

This romantic origin story is represented beautifully on their debut self titled EP, which is due for release in May‪.‬ The recording serves as both an introduction to the band and a promise of much more to come.

There will be bar facilities available for the purchase of beverages and food and hot drinks available from the Bliss Beat Curry stand.
Delicious Authentic Vegetarian, Gluten, Dairy & Nut Free CATERING:
www.facebook.com/blissbeatcurry

* NOTE: This event is all ages. Kids under 13 are FREE, and must be reserved online.
Sorry, strictly no refunds or exchanges.

Fusion Boutique is a multi award winning Blue Mountains based booking, promotion, producer, venue consultant and event management company presenting premier live entertainment to the local Blue Mountains area and beyond.
We also work as a publicist with artists directly in a promotion capacity.

Fusion Boutique Presents have a special newsletter Members Only pre-sale release for tickets to Victor Martinez Parada happening tomorrow morning Wednesday 27th January from 10am.
The concert will be held on Sat 15th May at Baroque Room, Carrington Hotel driveway entrance and with only 48 tickets available for this exclusive session we advise booking quickly to avoid disappointment!

A reschedule of the Daniel Champagne concerts to Sat 20th March and an addition of a 3rd and final session now means that there are some more very limited tickets available for the previously SOLD OUT sessions.

The MARK WILKINSON concert on Sat 6th March is now SOLD OUT, however guests can register via the waitlist to be the first in line should any further tickets be released.

Charity from Fusion Boutique has been presenting and promoting premier original live music entertainment consistently in the Blue Mountains for almost 12 years and they are looking forward to welcoming you back to enjoy some great social experiences in person again soon.
To keep up to date with announcements and to join the mailing list go to: www.fusionboutique.com.au