Concert and stories at the Kindlehill School Performance Space 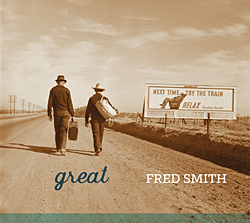 One of the few Australian songwriters who has both a US Marine Corps medal and a US merchant mariner’s license, Smith’s musical musings come with a lot of knowledge and experience. He spent four years in America, working cruise ships and touring the Eisenhower interstate system, and worked alongside American soldiers in southern Afghanistan. Now with the USA deeply divided, Fred Smith returns from the dust of Uruzgan to revisit his fascination for all things American.

The new double album features his brilliant balladry balanced with some raucous piss taking, and brings to the fore his reverence and comprehension of American music and mythology. Great is a remarkably eclectic double album collection of songs. The first disc includes 12 songs written and recorded in the classic American folk/country style – story songs, some funny, some sad, bringing to the fore Fred’s gift for melody and lyric, and his talent for inhabiting other people’s worlds.

On the second disc, Fred lets the band off the leash – drums, bass, electric guitars and horns. It’s a riot and a romp through songs and stories with American settings – mostly wry but sympathetic accounts of characters fictional and otherwise. The lead single, What Could Go Wrong, lampoons the contradictions in the Trump platform while celebrating the mix of ebullience and bald faced egotism that makes it impossible to take one’s eyes off Donald J Trump.

So what’s an Australian songwriter doing writing American stories? “Fair question” says Fred. “Like most of us, I grew up steeped in American culture: writers from O’Henry to Steinbeck, television from CHiPS to the A-Team, and 20th Century America produced musical stylings so sublime they have become universal mediums of musical expression.”

In performance, Fred will be accompanied by Matt Nightingale on double bass, and one other eminent sideman.

“Great is a wonderful album…insightful, poetic and often personal…beautifully drawn vignettes of the human experience”… “outstanding and a must have. ‘Great’ is his best yet.” – CD review By Ian Phillips; psnews.com.au

“…one of our finest lyricists…he shows true mastery of crafting melodies and marrying them to the words without recourse to a shotgun. Add his natural wit, keen powers of observation, unassuming delivery and understated accompaniment and he effortlessly draws you into the world of each of these character-driven songs.” – John Shand, Sydney Morning Herald

*** This show is now SOLD OUT!
For a fabulous range of other Blue Mountain events visit: www.fusionboutique.com.au
We advise booking early to avoid disappointment.  ***

The London Klezmer Quartet brings you klezmer, the celebratory and soulful music of Eastern European Jews, at its most beguiling and seductive. The subtleties of the original tradition, combined with a kick-the-chairs-over ability to party.

LKQ is a dynamic group of performers much in demand on the UK folk, world and pop music scenes. The band’s deep understanding of klezmer is reflected in exuberant, passionate and accomplished performances that captivate audiences of all ages and backgrounds.
The group plays old and new traditional material guaranteed to move audiences from toe-tapping to tears and back again in moments.

Formed in 2009, the band is already popular throughout the UK, has had five sell-out tours in Australia, as well as performing in Brazil, Germany, Holland, Latvia, New Zealand and Switzerland, and has broadcast live on BBC Radio 3 & 6, BBC TV, and ABC Radio.

“Dynamic and authentic” – Time Out

“A fantastic sound with inventive arrangements, Virtuosity, exciting original tunes and soulful playing. What’s not to like?” – Songlines Magazine

“The tradition is safe in their hands.” – Sunday Times

“Four of Europe’s most talented klezmer musicians. They bring a wealth of knowledge, experience and excitement to their performances.” – Frank London, the Klezmatics

“When Buraczewska sang, all the earthiness, profound melancholy and celebratory joy you could desire came surging to the fore via her vast, singular contralto.” – Sydney Morning Herald

VENUE: ‘METRO SOCIAL’ Metropole Guesthouse Lounge Upstairs (lift available) Cnr of Lurline and Gang Gang Streets, Katoomba, Blue Mountains NSW 2780.
Opposite the Katoomba train station.
There is limited parking available at the rear of the property. Access can be made through the rear and the lift to the lounge is in the atrium.
If entering from the front the cocktail bar/restaurant is on the right and access to the upstairs performance space in the lounge is up the stairs or via the lift towards the back of the hotel. 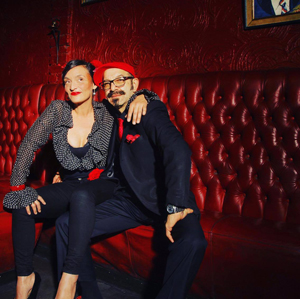 We are very pleased to welcome back Lolo Lovina ahead of their performance by invitation at one of the biggest festivals in the world – SXSW in Austin, Texas.

Lolo Lovina’s music reflects the cosmopolitan identity of an artist, who grew up with three native tongues and cultures. The charming and passionate performance of the charismatic singer makes each of her concerts an unique experience. Featuring Serbian Rroma drummer and guitarist Nenad Radic, Stuart Vandegraaff on Sax, clarinet & Ney, David Carr on guitar and banjo & Nathan Gatt on double bass.

Lolo Lovina have played at the Opera House, Guca Festival Serbia, in New Caledonia, in Europe and to full houses wherever they go.
Their album Rroma Sapien received a 4 Star review in the London based World Music magazine Song Lines (June 2016) with Rroma Sapien and RromAntics both being featured on ABC Radio Nationals program, ‘The Daily Planet’.

“(Lolo Lovina)…have created an album that swings from traditional to groundbreaking Rroma music, all imbued with a tremendous sense of fun” – Lucky Oceans, The Daily Planet ABC Radio National

“You have to listen to these people, this is the future of music” – Brian Eno, Luminous Festival, Sydney Opera House

“With musicians from Ukrainian/Romanian, Hungarian and Brazillian backgrounds, this music is authentic to its roots and played with vigour and precision.” – Bradfield Dumpleton

“Musically and culturally Planet/MGM consider the group to be in the forefront of contemporary world music coming out of Australia. Their live performances are exciting, varied and professional with consummate performance skills from all members.” – Graeme Regan, MGM the Planet Company

VENUE: ‘METRO SOCIAL’ Metropole Guesthouse Lounge Upstairs (lift available) Cnr of Lurline and Gang Gang Streets, Katoomba, Blue Mountains NSW 2780.
Opposite the Katoomba train station.
There is limited parking available at the rear of the property. Access can also be made through the rear. If entering from the front the bar/restaurant is on the right.

Drinks and light meals will be available from the Metro Retro bar once doors open.

This is an intimate seating space and tickets are exclusively limited