‘Broadway Baby’ is a fun and engaging cabaret show that is a mix of Old Hollywood Classics meets Broadway; from Judy Garland’s Over The Rainbow, Edith Piaf’s famous La Vie En Rose, to Shirley Bassey’s Hey Big Spender and more favourites!
All the big hits from the day – a vintage vaudeville!

Brittanie Shipway is an Australian singer/songwriter from the lower Blue Mountains region of NSW, known mostly for turning all four chairs in season 3 of ‘The Voice’ Australia with a breathtaking rendition of On My Own (Les Miserables). Ricky Martin exclaimed that her version of the piece was in his “top three” of all time, whilst pop princess Kylie Minogue said Brittanie “could walk onto Broadway tomorrow”.

A professional singer and actor, Brittanie performs for Musical Theatre productions, Stage, Corporate Functions, Television, as well as to sold out performances for her own cabaret shows.
Known as The Voice of Musicals in the Mountains, her dulcet tones and distinct showmanship are fast earning her a reputation as a rising star.
Hailed by theatrepeople.com as a “magnificent voice” for her performance as Eponine in Les Miserable at Riverside Theatre (2012), Brittanie is becoming one of the most highly sought after voices in Greater Western Sydney. She has featured in numerous musicals for the Blue Mountains Musical Society (BMMS), most notable of which were her performances as Rizzo in Grease (2012) and Belle in Disney’s Beauty and the Beast (2011), and again as Eponine in Les Miserable (2009). Brittanie began her musical training at the age of six under the tutelage of Sussane Towers (Australian School of Vocal Performance), and with the support of her family, she was quickly recognised for her remarkable vocal maturity and control.

She has recently shared the stage with Marlisa (X-Factor Winner), Taylor Henderson (X-Factor alumni), and Damien Leith (Australian Idol Winner) to sold out audiences across Sydney.

Recently, Brittanie has developed her talents as a songwriter, with her single ‘It’s Over’ debuted in the iTunes Top 30 Alternative charts, and was a finalist in the Australian Songwriting Competition (both Ballad and the Parramatta Prize 2014).

She is also an Ambassador for Nordoff Robbins Music Therapy, along with Jimmy Barnes and Megan Washington, and Bully Zero – both of which are organisations close to her heart.

With a bright and promising talent, Brittanie’s career will continue to rise in the entertainment industry and we need only count down the time before Brittanie Shipway is a household name of classical proportions. 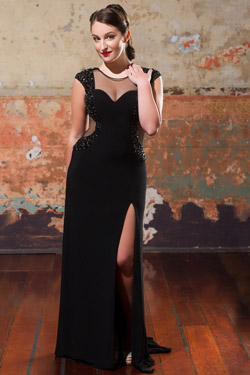 General Admission. Room configuration is a mix of cabaret seating and standing/dancing.
*Please note that the ‘Baroque Room’ is an over 18 years only venue. No minors will be granted entry to the event.

OR Online $26.50 (Including booking fees):
www.trybooking.com/HJYY