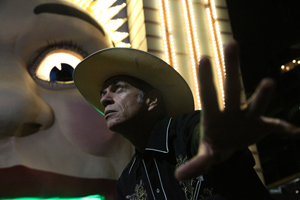 John Kennedy’s 68 Comeback Special will be bringing their Urban and Western sounds to Blackheath Bar & Bistro in open entry format.

An enthusiastic young music journalist once described John Kennedy as a humble genius. John is neither a genius nor particularly humble. The Sydney musician is the writer and performer of many fine songs, some of which have found a place in the hearts of music fans of the golden era of Australian independent music.
John Kennedy started his music career in Brisbane in the ‘80’s with his band JFK and the Cuban Crisis. He moved to Sydney with the band and had early success with heavy JJJ airplay of indie hits like ‘The Texan Thing’ and ‘The Ballad of Jackie O’. The band broke up and John moved on to a strong solo career with his band John Kennedy’s Love Gone Wrong. More indie hits followed with songs like ‘King Street’ and ‘Miracle (in Marrickville)’ helping define what John called his Urban and Western sound.
Despite topping the Australian Independent Music charts with the ‘Always The Bridegroom’ album, commercial crossover proved to be elusive leading to John’s decision to leave Australia. He spent the ‘90’s living and playing music in Berlin, Hong Kong and London before returning to Sydney in 2000. He formed a new band and continues to perform and produce independent releases with his band John Kennedy’s ‘68 Comeback Special.

This time John returns to BB&B in full band mode. Their regular guitarist, ex-Wiggle Murray Cook, won’t be available for this gig so they will be joined by Richard Burgman (The Sunnyboys) on lead guitar. The band also consists of Peter Timmerman on drums and Phil Hall on bass.
Audiences can expect great music and many humorous stories relating to these songs.

Due to ongoing capacity restrictions, bookings are highly recommended and can be made online through OpenTable at www.blackheathbarandbistro.com.au
Or call 02 4787 5787 or email to reserve a table.