*** This show is now SOLD OUT!
For a fabulous range of other Blue Mountain events visit: www.fusionboutique.com.au
We advise booking early to avoid disappointment.  *** 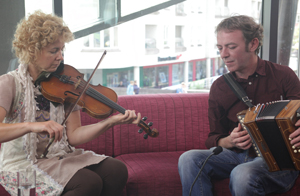 Dermot Byrne was awarded TG4’s Traditional Musician of the Year in 2013. From Buncrana in Co. Donegal, he is recognised as one of the great accordion players of his generation.

Bríd Harper is a senior All-Ireland Fiddle Champion and is enormously respected both as a teacher and performer.

This duo will be visiting Australia for the first time.

Bríd Harper is hailed as one of the leading exponents of traditional fiddle playing of our time. Encouraged by her parents, she grew up learning and playing Irish traditional music, going on to win numerous under-age All Ireland titles and other prestigious fiddle awards including the Senior All Ireland, Oireachtas na Gaeilge and Fiddler of Dooney. An MA graduate of the Irish World Academy at the University of Limerick, Bríd has toured extensively and performed with many great musicians including Dermot Byrne, Tony O’Connell, Steve Cooney, Donogh Hennessy and Arty McGlynn. Bríd is a highly respected teacher and has tutored at many summer schools and workshops throughout Ireland and in France, Holland and the USA. Her first solo CD was released in 2015 and has enjoyed much success to date.

Dermot Byrne has played accordion since a very young age, having learned from his father Tomás O’Beirn, who comes from Teileann area of South West Donegal, and is an enthusiastic promoter of the tradition. Dermot had the good fortune to meet all the greats of Donegal music, including Johnny Doherty, Con Cassidy and Tommy Peoples, Danny Meehan and many more, and they made a great impact on the young Dermot, who went on to develop a unique style. His seemingly effortless playing, combined with great subtlety, and a faultless ear, makes him one of the great accordion players of his generation. As well as his mastery of the Donegal style and repertoire, Dermot can turn with ease to other styles and traditions such as French musette, or South American choro music. He guested on two Altan recordings “The Red Crow” and “Island Angel” before joining the band in 1994. Dermot has guested on collaborations with many great musicians including Seamus and Manus McGuire, Sharon Shannon, Salsa Celtica, Steeve Cooney, Dezi Donelly, Brid Harper, Frankie Gavin, Tommy Peoples, Pierre Schryer, Tim O’Brien and the late jazz violinist, Stephane Grappelli. He was the recipient of TG4 Gradam Traditional Musician of the Year in 2013. According to Siobhan Long (Irish Times) his solo recording in 1995 and re-released in 2015 is ‘a timeless delight that stradles centuries with the agility and ease that Byrne’s fingers ricochet across the reeds’.

Witches Leap take the dark modal sounds of old Ireland, filter them through the hanging swamps of the Blue Mountains and cut them with original convict-noir folk songs of black bushrangers and errant redcoats. Born out of the kitchen table sessions of the Blue Mountains, this trio features the distinctive earthy tones of the uilleann pipes, wooden Irish flute and bouzouki, along with acclaimed songwriting from Paddy Connor (Lime and Steel). With original tunes springing from the local sandstone and mythology, Witches Leap takes Irish trad on a journey through the grit of early New South Wales.
Witches Leap are currently touring the new EP they recorded in Blackheath: “Tunes From the Hanging Swamp”.

Only 12 tickets to go before this show is SOLD OUT again under the current capacity restrictions.

Mark Wilkinson's ‘Hand Picked, Vol. 3’ is the newest instalment in his much-loved acoustic series. Available worldwide from Friday February 12th, it continues the tradition of showcasing his songs laid bare, in their most raw and honest form.
It’s a sentiment fans around the world know well, whether they’ve seen Mark on stage, just a man and his guitar, or if they’ve come to discover him through his first two volumes. The original Hand Picked endeared him to tens of thousands with ‘Middle Ground’ broadcast on television throughout Australia and New Zealand. Volume two’s ‘Everything to Me’ found millions more with regular radio rotation across the US and Canada.
Now, ‘Hand Picked, Vol. 3’ brings that same intimacy. Recorded on a farm in the NSW Southern Highlands, each song captured as a live take with one microphone, the natural setting of the surrounds adds a beautifully unique sonic texture.
To celebrate the release Mark will be returning to the road, crossing open borders after a long absence, sharing songs from the new album along with many other favourites.